On the 11th October 2014 the Living Story Music Ensemble performed a commissioned work as part of the Marsden Jazz Festival.  Chris Bridges wrote the words and music for I Have A Duck Who Can Roar, with pictures by Ann Gilligan of Green Monster Arts.

With a fantastic band comprising Hugh Lawrence on Drums, Dave Tompkins on Bass, Keith Phillips on Guitar, John Ellis on Piano, Andy Morel on Saxophone, Chris Bridges on Trombone and the amazing narration of Mary Oliver the show includes lots of audience participation, and is a celebration of new music and storytelling.

Two performances took place at 12 and 2, transforming the normally tranquil Standedge Tunnel Visitors Centre with scenes of dancing, singing, roaring like a duck and a very silly conga.  Children sat watching and listening as the story was told, the band played and the pictures were projected on to a large screen, but then joined in for a final rendition of “And We Shake Our Tail Feathers”.

For more information go to marsdenjazzfestival.com

And for the video of the story – 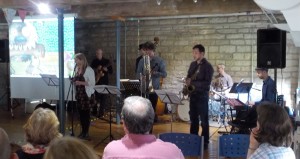 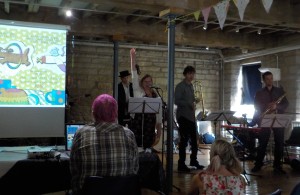 Music and storytelling go together to make each a little more exciting. The Living Story Music Ensemble performed for the first time in the 2011 Manchester Jazz Festival, playing a musical version of Julia Donaldson’s brilliant story, The Smartest Giant in Town. The idea was to offer a family friendly event as part of a great jazz festival without compromising any aspects of the music.  With an amazing but highly individual group of musicians performing some strange and quirky tunes, following the wonderful narration and singing of Mary Oliver in some outrageous improvisations it was successful in this performance and at later performances in the Manchester Museum of Science and Industry, at the Ribble Valley Jazz Festival and at the Marsden Jazz Festival.